I was picking up my daughter the other day from basketball camp when I noticed something interesting. The door to the gym entance was covered in padding. See the picture. 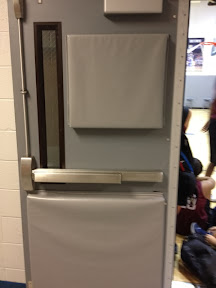 My first thought when I saw the door was "wow they don't want anyone to get hurt". That may be true, but for what reason? Was that the absolute motive behind their actions? Or, is there another reason such as avoiding a lawsuit.

Sometimes we do things for our good rather than the good of others. The result may look the same, but the motive can be entirely different. The motive behind the action illustrates the true character of the individual.

So, the next time you are motivated to do something think of the following:

People may be pure in their own eyes, but the Lord examines their motives. (Proverbs 16:2)