I love going to the movies, but I don't get to go too often. Every now and then there is a blockbuster hit that I have got to spend the money and see. But for the most part, I wait until a movie comes out on DVD and then rent or purchase it. Sometimes I even wait until it hits Netflix before I watch it.

Years ago the theater was a little different. It was not indoors and it did not have plush seats, air conditioning, and 7.1 surround sound. People had to sit on rock seats in the outdoors and listen to the live show or presentation from the ground level.

One of our first stops in Israel was Caesaria by the Sea where I had posted Herod the Great's palace ruins and swimming pool. In this same area is the theater that was also built by Herod the Great and its construction was probably 20-10 BC. This theater was well kept by the Romans and is still in use today after its excavation in the 1960's. Of course some remodeling had to take place. 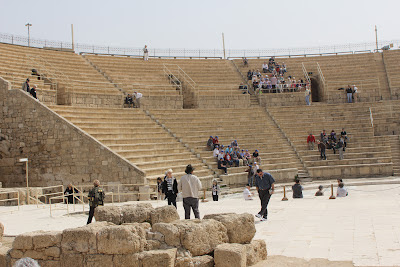 Imagine the different people who have stood before an audience or found themselves within the audience of this old theater. We know that Pontius Pilot was there because an inscription was found near the theater where he dedicated a temple to Emperor Tiberias.

Think about it,
Doug Johnson
www.dougjohnson.net
Posted by Doug at 11:27 AM