As we begin our series "Questions from Teens" we are going to start off with a very tough question. Yes, this is a question from a teenager. This is not the typical question that you would normally hear but it illustrates an important element of what teens face and think about. When you read it, ask yourself how you would answer it.

"Are evolution and Christianity compatible? Are there alternatives to neo-Darwinian evolution in the realm of evolutionary theory?"

First, I want to ask is how a high school student is asking about evolution and neo-Darwinian evolution. To answer, understand that our teens are faced with these subjects starting in middle school and reinforced throughout high school. Some of these terms may not look familiar to you so we are going to define them.

The first term we are familiar with but we must understand there are different facets of the term. In light of the question we will narrow the subject to human evolution and define it from The Encyclopedia of Christianity.

Human Evolution: A very large field that can only be mentioned here is the history of human evolution, which studies the emergence of the human species among the other primate species. This field, which brings together primatology, paleontology, anthropology, genetics, and molecular biology, offers new ways to describe the relationship between humans and other animals.
Even this brief sketch of the range of sciences that deal with evolution indicates that evolution is today one of the most critical and fruitful ideas governing our understanding of human life and thought. Evolutionary science confronts philosophy, ethics, and theology with a formidable range of deeply significant issues. [Erwin Fahlbusch and Geoffrey William Bromiley, vol. 2, The Encyclopedia of Christianity (Grand Rapids, Mich.; Leiden, Netherlands: Wm. B. Eerdmans; Brill, 1999-2003), 230.]

The next term we will deal with is a rather new term and we will get the definition from the Concise Oxford Dictionary.

One doesn't hear too much about the second defined term, however, it is something we need to be aware of. Neo-Darwinian Evolution takes the standard evolutionary theory to the next level. Darwin's original theory was presented before the discovery of genetics. This discovery created problems for the theory itself. Therefore, a modified theory was created and is known as the Neo-Darwinian Evolution theory. This new theory adds individual genetic traits transferred to successive generations.  Without getting too involved in the theory's explanation we could add that it includes the differential transmission of alternative gene alleles for species characteristics. These characteristics are passed to the offspring.

If you still have questions in regards to the terms there is plenty of information on the Internet to help see the theories clearly.

Let's answer the questions posed by the teenager. The first question is "Are evolution and Christianity compatible?" My first reply is that evolution does not fit the facts of science. For evolution to be credible science has to support the theory. Look at the following chart from Defending Your Faith by Dan Story: 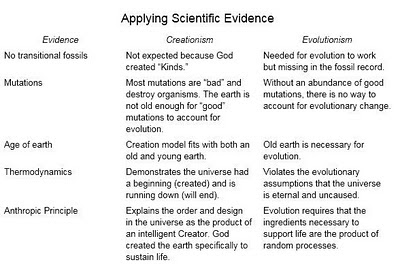 Let's look at the second question. "Are there alternatives to the Neo-Darwinian Evolution Theory in the realm of evolutionary theory?"

If the basic elements of evolution are flawed and unsupported by scientific evidence then any building block placed on top of a flawed foundation will also fail. So, the answer to the question is "no".

In summary, I believe the words of Dan Story summarizes it quite well when he said the following:


When all the evidence is in, one fact stands out. Believing in atheistic evolution demands an enormous amount of faith. In fact, in light of the scientific evidence, it takes much greater faith to believe in evolutionism than it does to believe in creationism. Evolution requires us to believe that out of chaos, time, and chance arose order, design, and harmony. It teaches that life came from nonlife, that human ethics and morality came from amorality, that human intelligence came from irrationality. By comparison, creationists look out upon the orderly universe, the design and harmony in nature, human morality and rationality, and see their source in an intelligent, moral, all-powerful, creative God. Which requires the most faith to believe? [Dan Story, Defending Your Faith (Grand Rapids, MI: Kregel Publications, 1997), 150.]


As a student begins to ask questions about what they are learning in school we as parents, ministers, and Christian educators must be ready to understand and discuss the differences between evolution and creationism. Too often we don't have the answer and we don't act like we want to find the answer. Our students and children will see that we don't know and accept the teaching of the evolutionist. Which do you want to happen?

I know that some of you reading this may have adopted the idea of Theistic Evolution (the idea that God started the creative process, and allowed nature to take its course through macroevolution). This post is not designed to answer every element of evolution but to only answer the question posed by the teens. We may discuss the flaws in that theory in the future.

In Christ,
Doug Johnson
www.dougjohnson.net
Posted by Doug at 8:00 AM

Email ThisBlogThis!Share to TwitterShare to FacebookShare to Pinterest
Labels: devotion